10 things to see in Terni 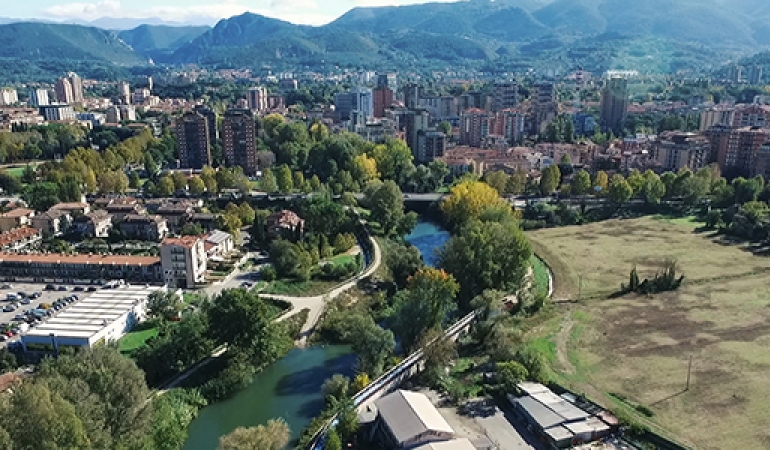 The town of Terni, better known as the “town of steel”,  actually offers various quality attractions: from cultural heritage of bygone times to contemporary architecture born from projects by Ridolfi, Frankl and Bazzani as well as extraordinary natural beauty.
Not exhaustive by any means, we propose a list of ten places that we think are fundamental to have an overview of our town.

The Amphitheatre is the only Roman monument still partially intact and visible. The structure, in opus reticulatum, is made with small bricks in two different colours, framed by pilasters in opus vittatum, that form a series of arches. One part still has the original walls, while all the rest can be easily reconstructed thanks to the perfect superimposition of the monument itself and the following mediaeval and more recent phases, which are placed directly on the Roman remains.

The Cathedral of Santa Maria Assunta was born as a Romanesque basilica with three naves, of which only a few remains are left, such as the central portal and the walls beneath the portico. Between the mid 16th and mid 17th centuries it was radically rebuilt to transform it into a basilica with three naves, with a large transept and dome  at the interception of the cross vault. The works of art inside include the monumental organ, the design of which is attributed to Bernini and the main altar in polychrome marble, built in the 18th century on a design by Carlo Murena, pupil of Vanvitelli.

Erected in 1265, St. Francis’s, originally with a single nave,  was gradually enlarged until it became a three nave structure enriched with a large Renaissance apse and monumental side chapels.
From an artistic point of view, the decorative paintings of the Last Judgment of the Paradisi chapel stand out.  The bell tower is of particular interest, with mullioned and four-light windows enriched with a string course in polychrome  ceramic.

St. Saviour’s dates back to the early Middle Ages, it is one of the oldest religious buildings in Terni, certainly the most evocative. Archeological excavations carried out in the area uncovered the remains of a Roman domus, upon which the Church was later built. Today the building is made up of several parts, the result of subsequent extensions: in the Romanesque period a short two-span nave was added to the round cell, then in the 14th century the Manassei chapel was built. The highly suggestive interior houses several cycles of frescoes.

The Romanesque Barbarasa tower is in Via Roma and is the best preserved among the mediaeval tower-houses. The tower, believed to be a construction in defence of the town, was most certainly standing “guard” over the Barbarasa family property. A plaque on high reminds us that from here the relic of the Precious Blood was on display, preserved in the Cathedral, to keep the plague away from the town.

The “Lance of light”, better known as Arnaldo Pomodoro’s Obelisk, is the modern symbol of Terni, and represents the evolution of iron casting from the base right up to the point that looks like gold. It is actually five blocks of stainless steel. The art of Terni’s founding experts by using various alloys make the stainless steel take on different colours. A total weight of ninety tons for a work of art measuring thirty meters in height..

The Basilica of St. Valentine stands on the site of an old Christian cemetery which is one of the most significant testimonies of Paleochristian necropolis in Umbria. Dedicated to the patron Saint of the town and to lovers, it was built on the site of the martyr’s burial ground. Beneath the main altar the glass case containing the reliquary statue of St. Valentine can be seen. The crypt is interesting which constitutes the original nucleus of the church.

The Marmore Waterfall, not far from Terni, is 165 meters high, divided into three drops and is one of the highest in Europe. It is an artificial waterfall, created by the River  Velino crashing down into the Nera River below, whose waters are used to power the Galleto hydroelectric power station. Inside the Waterfall Park there are six fascinating trails from which the waterfall can be admired from several vantage points with wonderful views or even practice a series of outdoor sport, such as rafting, canyoning, hydrospeed or kayaking. The Marmore Waterfall Park also offers the possibility of visiting some caves and karst shapes carved out by the water over the millennia.

Piediluco Lake represents one of the remains of the ancient Lacus Velinus, a large alluvial basin originating from the Quaternary. The Lake, very similar to an Alpine lake, has an irregular shape: a elongated central body from which several branches fork out. The lack of currents and the presence of fairly regular winds make this lake an excellent competition field for rowing regattas.

Carsulae was an ancient Roman town that stood along Via Flaminia, a short distance from Interamna Nahars (Terni). Of the rich and active centre developed in the Augustan age, the remains of the main public, civil and monumental are still visible: the Gemini temples, the basilica, the theatre and amphitheatre, funerary monuments, a thermal plant and the monumental arch of San Damiano
For some years, thanks to the support of various universities, excavation campaigns are ongoing that continuously uncover remains that help archeologists to reconstruct the history of this mysterious Roman town.