The Abbey of San Cassiano 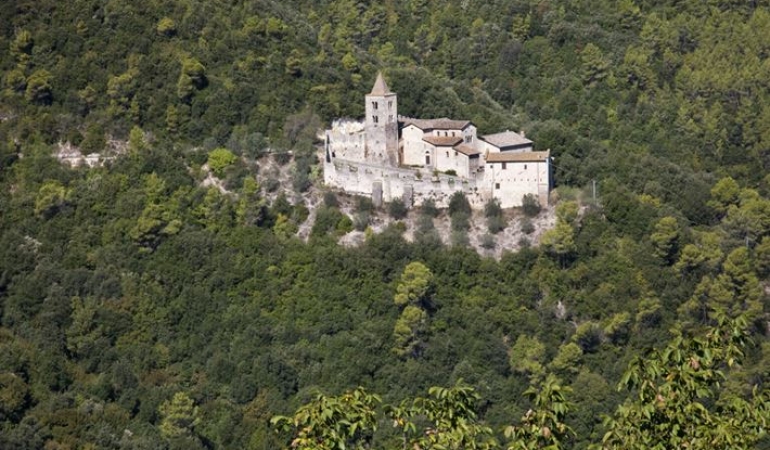 Secluded among the green woods of Monte Santa Croce, in the Narni area, the Benedictine abbey of San Cassiano has the charm of places that preserve centuries of history. But the charm of San Cassiano also comes from the beauty of the nature that surrounds it and from its splendid panoramic position. It is very likely that in addition to being, similarly to other Benedictine monasteries, an important spiritual, study and work center, San Cassiano also served as a garrison of the territory as its location dominated the ancient route of the Via Flaminia. Some inscriptions found during recent restoration work indicate that the abbey already existed in the second half of the 10th century. The monastic complex, protected by crenellated walls, is made up of the church and buildings once used for the activities of the monks and for the reception of pilgrims. The elegant pointed bell tower stands out over the complex. The church originally had  a Greek cross plan because San Cassino was built on a previous 6th century monastery built by a Byzantine general to control the crossing of the Nera river. The original layout, transformed in the fourteenth century, was made visible again by the restoration in the second half of the last century. Other Byzantine elements are still visible, including remains of some decorations. The abbey of San Cassiano, currently uninhabited, can also be reached through a trekking path that begins near the Augustus Bridge.