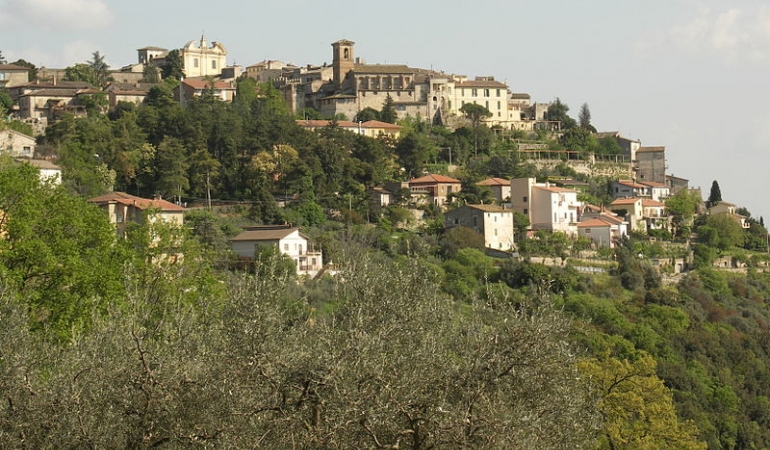 From the remains of what was a pre-Roman place of worship, to the small church of San Pancrazio on the mountain of the same name; from the Way of the Franciscan Protomartyrs, to the beautiful churches rich in  artworks. A historical, spiritual and artistic heritage that makes CALVI dell'UMBRIA a place that deserves to be visited. The medieval village does not tell the whole history of the place, given that the traces of settlements in this area lead much further back in time as revealed, for example, by the remains of the Italic temple, probably from the 6th century B.C. lying on the mountain that bears the name of the patron saint of Calvi, San Pancrazio. The town is grouped on a rocky spur on the slopes of the mountain. In the historic centre, the churches of Sant’Antonio abate and Santa Brigida, united in a single architectural façade designed in the mid-1700s by Ferdinando Fuga, overlook the cosy Piazza Mazzini. In the first, the monumental artistic nativity scene-a mid-16th century work of art by Giacomo and Raffaele da Montereale- is permanently exhibited. The figures are in terracotta and those in the foreground of considerable size. Many of the Murales that colour some of the town's streets and which have been painted by artists from abroad are inspired by the theme of the Nativity. The Museum of the former Ursuline Monastery, housed in the seventeenth-century Palazzo Ferrini, displays  important works of art, including those from the churches of the area and from the monastery itself, dating back to between the sixteenth and eighteenth centuries and the valuable collection donated by the Roman Chiomenti-Vassalli family, consisting of paintings and sculptures. One of the major figures linked to this place is San Berardo, Franciscan Protomartyr, martyred in Morocco in 1220 together with four other friars from lower Umbria. The Way of the Franciscan Proto-martyrs connects the birthplaces of these saints, including along the way some of the sites that most testify to the spiritual experience deep-rooted in this part of Umbria.