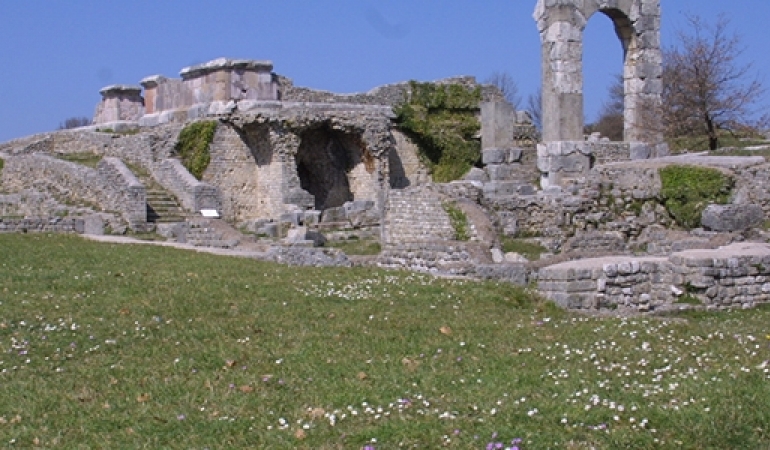 Carsulae
The rests of the Roman city of Carsulae, the most important archeological site of Roman period in Umbria, is located a few kilometers from Terni and Sangemini, known for the mineral waters. Probably, one of the factors that determined the birth of this center was the presence of sources that were used to power the s.p.a.  But it was above all its location along the Via Flaminia, that helped the growth and the development of Carsulae, that in the 1st century A.C. was a important Roman center.
The Via Flaminia was opened between 220 and 219 B.C. and the Carsulae foundation was made after few years.
However, a few witnesses of this phase of its history remains.  The archaeological excavations, especially those carried out between 1951 and 1972, have brought to light part of the urban layout built between the 1st century B.C. and the 1st century B.C. Right from the remains of the buried buildings, scholars have evinced that in this period, Carsulae was a prosperous city.
The itinerary includes the “Foro”, “Gemini temples”, “San Damiano Church”, the basilica, the amphitheatre, the theatre and “San Damianio arch”.  Outside the town centre, there are the remains of important funerary monuments. The tour winds along the urban stretch of the Via Flaminia, which was the cardo maximus of the city.  Carsulae was definitively abandoned between the 3rd and 4th century A.C. and also for a less rilevant role for the commerce that progressively had the branch of the Flaminia along which this Roman centre was located.
For informations about costs and timetables: www.carsulae.it

Roman Amphitheatre (1st century A.C.)
The most important testimony of the Roman city of Interamna is the Amphitheatre.  It was located inside the city walls (a section of which is still preserved under the public gardens of the Promenade), near the south door.
The construction of the building was made the first decades of the 1st century.
The alteration that has suffered during the centuries have left intact the elliptical shape of the building as well as the building technology in opus reticulatum bichrome is still clearly visible.
The Amphitheatre has been renovated several times and is used during the summer for cultural events.
The Amphitheatre is located in: “Via dell’Amphitheatre”
For information: 0744 285946
Opening hours
Visit by appointment during opening hours of "CAOS"
Entrance fee: full 5; reduced 3.50 (also allows you to visit the Museum of Modern and Contemporary Art "Aurelio De Felice" and the Archaeological Museum). For residents of the municipality of Terni admission is free.

Archeological museum
Several archeological relics of preromanic and romanic period rediscovered in the area of Terni, are collected in the Archeological museum, that with the Modern art museum is the museum centre of the city of Terni.
The archeological museum is divided in two section: the preromanic section and the romanic section.  In the first section are exposed relics that belongs to the settlements of “Maratta bassa” (X-II century B.C.) and what was in the nearby of the “via dell’Ospedale” (VIII-VII century B.C.), as well as those recovered in the sacred area of Monte Torre Maggiore (VI B.C.-IV A.D.).
Other notable materials on display in this section are the funerary objects found in the necropolises of the territory - that of the Steelworks (X-IV century B.C.) and those of San Pietro in Campo and the former Poligrafico of Alterocca (VII-VI century B.C.).      The Roman section is represented by some testimonies of the city of Interamna, such as architectural remains, mosaics, epigraphs and funerary monuments.
For informations about costs and timetables: www.caos.museum