The Church of San Salvatore 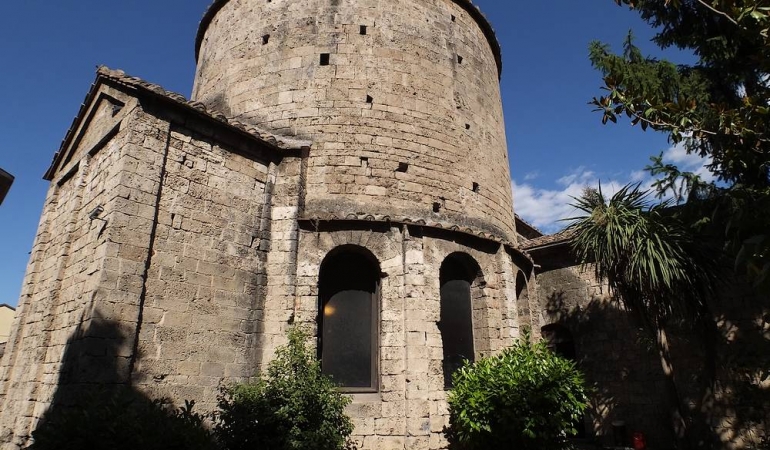 In Terni it is also called "Temple of the Sun", a name originated over time from the belief that on the site where the Church of San Salvatore stands today, in Roman Interamna, there was a sacred building with a circular plan dedicated to the Sun. However, excavations carried out in this area have not brought to light Roman structures which used to be a place of worship. The beautiful church of San Salvatore,(one of the oldest in Terni) a step away from Palazzo Spada, fascinates with its circular presbytery, which is also the oldest part of the building (VIII-XI century),probably originally an oratory or presbytery. Particularly striking is the cylindrical structure which ends up forming an oculus. The visit deserves some time to admire the fine frescoes painted over three centuries, from the'300 to the' 500. The painting of the "Crucifixion" stands out in the rectangular apse. Valuable evidence of local painting of the fourteenth century is the cycle of frescoes that decorate the Manassei chapel (added in the XIV century)among which you can admire "Enthroned Madonna with Angels", "Saint Catherine of Siena and Maddalena", "Christ crucified among the mourners "; in the arch,four Saints,including "Sant’Agnese". A document reports that the meeting between Pope Zacharias and the Lombard king Liutprand in 742 took place in the "oratory Salvatoris", which according to some scholars would correspond to the original church of San Salvatore, a hypothesis which however is not supported by documentation.