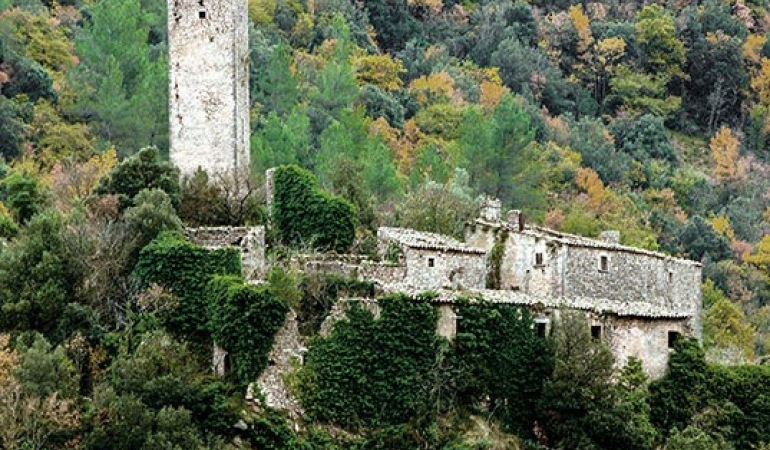 The path, particularly suggestive both from a naturalistic and historical point of view, is not very demanding and allows anyone to discover the magic of a particular place: Umbriano.
The itinerary starts from Colleponte (270 m a.s.l.), a fortified nucleus of medieval origin which together with Macenano (315 m a.s.l.) formed the ancient Castle of Capo la Terra, once guarding the viability of the Nera valley. The Umbriano Castle, (destination of our itinerary) instead protected the Abbey of S. Pietro in Valle from the north.
The first part of the route is practically inside the Colleponte village parallel to the course of the Nera River, an evocative stretch of the Valnerina, once a fundamental link for people and goods along the valley and junction of the various transversal itineraries between the parallel valleys.
Note the fortress and the church of San Giovanni Evangelista, once dedicated to Sant'Apollinare and the Church of the Modonna delle Grazie.
Outside the village, the route climbs up into the woods until it reaches the Umbriano castle (m.358 a.s.l.), which has long since been completely abandoned. Positioned on the steep north slope of Monte S. Angelo, its origin seems to date back to the period of the Saracen invasions although some inlets on the rock, testify to the presence in this place of ancient Umbrian settlements (8th-7th century BC).

The charm of this place is characterized by its mystery, and by the signs left by the multiple civilizations that have settled there. As soon as you arrive in the place you are in front of the first dilapidated houses but still clearly visible as a structure. All have the same characteristic, on the ground floor the barns and stables, tanks for pressing grapes; on the first floor the kitchens and living rooms and, on the floor above, wooden roofed rooms where there are stone fireplaces. This type of architecture, such as windows embellished with window sills and stone portals, confirm how prestigious the castle was at the time.  In the center of the village, with a fantastic viewpoint, there is a church in which fragments of frescoes dating back to the work of Spain are said to be still visible, including two still identifiable, San Sebastiano and Crucifixion with the Eternal. The whole town is then dominated by the remains, still well preserved, of the fortress watchtower, from which, while climbing, the entire valley is visible and in particular the abbey of San Pietro in Valle which could be controlled from here and defense. From the same path, you return to Colleponte with about an hour's walk as before.

N.B
Some historical assets of the ancient castle have been looted over the years. Unfortunately, the site, being completely abandoned and therefore not protected, is at risk of vandalism.