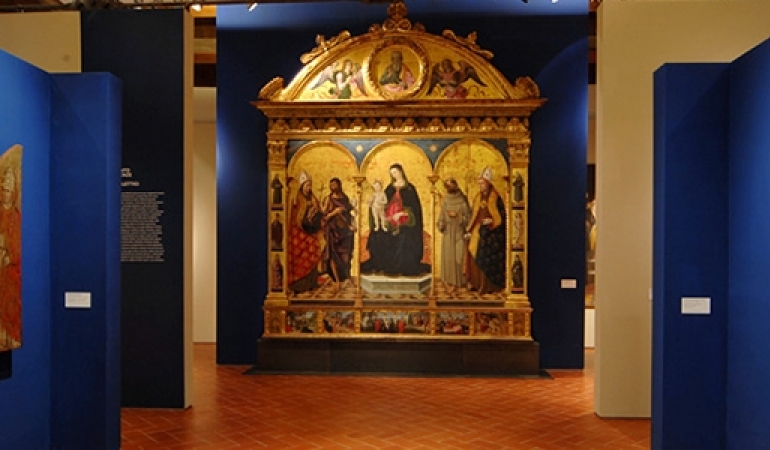 Walking in search of museums, you can’t miss the visit of CAOS (Centro Arti Opificio Siri), cultural center of the city, located in the historical center of Terni, born from the conversion of the ancient chemical factory.
A total area of 6000mq that collects the “Museum of modern and contemporary art A. De Felice”, the “Archeological museum” (see the archeological itineraries), temporary national and international expositions, creative laboratories, the Theatre Secci, spaces for residencies and artistic productions, a library, a video hall and a bookshop/café.
Inside the “Museum of modern and contemporary art A. De Felice”, the new layout of the Municipal Picture Gallery is located in this area (before hosted at the Gazzoli Palace) and a whole area dedicated to the contemporary art with an attention to the artists of the territory.
The ground floor of the building for the permanent exhibition is dedicated to 20th century and contemporary art.  The first rooms host the works of Italian and European artists related to Realism and Abstractism (Greco, Gauli, Montanarini, Turcato, Severini, ecc.) while in the others rooms there are most recent works (Mastroianni, Miniucchi, Pomodoro, PizziCannella, Vedovamazzei, ecc.).

A big area is dedicated to the local young artists. The first floor is dedicated to the collections already hosted in the Pinacoteca Civica: the large hall of ancient art with the "pala dei francescani", a masterpiece by Piermatteo d'Amelia; the gold background table by Benozzo Gozzoli and paintings by Giovanni di Pietro known as lo Spagna, Niccolò di Liberatoredetto l'Alunno and many other works by artists who worked in the region between the XIV and XIX centuries.
Moreover numerous sculptures by the master Aurelio De Felice and paintings by the naive painter Orneore Metelli, as well as other works by local historical artists take part in the collection (Ciaurro, Castellani, Mirimao, Fatati, Carotti, Fabri, ecc.). The collection of graphics signed by the protagonists of twentieth-century European art is particularly important (Picasso, Chagall, Kandinsky, Mirò, Leger, Braque, Cocteau, Ernst, Arp, ecc.).

In the heart of Terni, near the cathedral, behind the public gardens of the “Passeggiata” is located the Diocesan and Capitular Museum that host various works of sacred art from churches, chapels, oratories, convents and monasteries in the territory of the diocese in five rooms of the reconstructed palace of “Seminario vescovile”.  You can admire paintings, altarpieces, plastic works and liturgical objects that testify to the vivacity and artistic diversity of the area. The museum is divided in two section: the first testifies to the religious commission of the diocese from the fifteenth to the seventeenth century, the second is the presence of contemporary artists in the area.

Among the paintings, it is worth mentioning the altarpiece depicting the Madonna with Child and Saints by the Flemish painter Martin Stellaert, the Circumcision by Livio Agresti, made in 1560, and the Resurrection of Lazarus attributed to the workshop of Guercino.  A section of the museum is dedicated to contemporary sacred art and collects various pictorial and sculptural works created by artists of international fame who in recent years have had relations of commission with the Diocese. Following the “museum path”, in the city center, next the ex- San Tommaso Church, it’s possible to visit the permanent exhibition of Paleontology. The structure hosts and shows paleontological collection of fossils of marine invertebrates of the Pliocene sediments of south-western Umbria and of Vertebrates Plio-pleistocenici found in various localities of the southern branch of the famous 'Bacino Tiberino'.