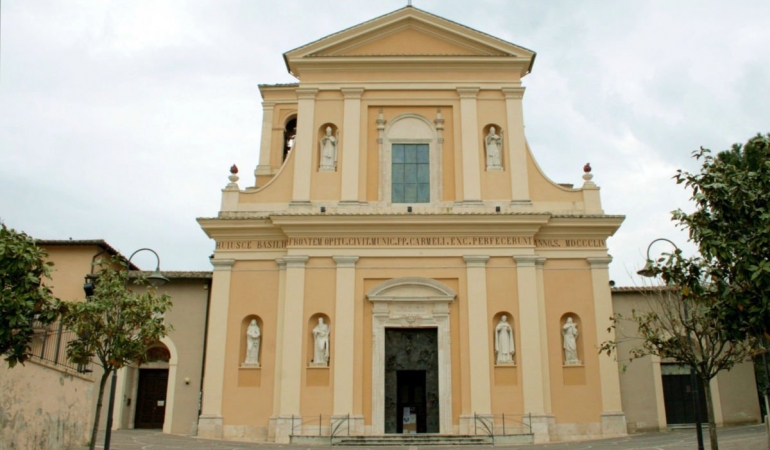 Terni city of San Valentino.Because,despite being celebrated in many parts of the world as the protector of lovers on the anniversary of February 14, Terni has an extraordinary bond with Valentine's Day, so much so that it is its Patron Saint. And if the message of love, in the fullness of its meaning, which he left us has a universal value, this city has welcomed it and made it its own. Valentino was bishop of Terni, or rather of Interamna - the toponym in Roman times - in the 4th century. Recent studies have added new elements relating to the chronology of his life, which can be contexualized, in the IV century but in the following one. Consequently, the saint's martyrdom did not occur in 273 but probably in 347.

Valentino di Terni was martyred with the beheading carried out in secret along the Via Flaminia, near Rome, after being arrested, "guilty" of having pushed some young people to convert to Christianity, including the son of the philosopher Craton together with Proculus, Efebo and Apollonius, his pupils. The prefect of Rome, whose son had recently converted, was arrested and executed. Proculus, Efebo and Apollonio buried Valentino in a cemetery area just outside Terni, where the three young men were also buried, who suffered the same martyrdom.

In the fifth century, a first church was built on the burial site, which was then destroyed during the invasion of the Goths. This original construction (or perhaps a second one from the 6th century) was followed by a new construction in the 13th century, of larger dimensions. At the beginning of the seventeenth century, excavations were conducted under the church to exhume the body of the Saint, which was found with the bust separated from the head, confirming the martyrdom carried out with beheading. The remains of Saint Valentine are kept in an urn (17th century) under the main altar of the present Basilica, begun in 1606. Stucco statues are placed on the 17th century facade (with Saint Valentine and Saint Anastasio in the upper part); they were added in the 19th century. The interior, with a nave, has many 17th century paintings, including those by Lucas De La Haye, a Carmelite monk: one of these is located in the chapel dedicated to Saint Teresa of Avila and portrays the "Madonna and Child between Saints Joseph and Teresa ". By the same artist are "St. Valentine invokes the protection of the Madonna on Terni" (central altarpiece) and "Adoration of the Shepherds" and "Adoration of the Magi".

In the chapel of San Michele there is an altarpiece by Giuseppe Cesari known as Cavalier d’Arpino (17th century) which depicts "San Michele defeating the devil". Andrea Polinori is the author of the canvas "Madonna and Child with Saints Lorenzo, Giovanni Battista and Bartolomeo" from 1635. On the altar of the Confession is the painting "Martyrdom of St. Valentine" (17th century).

On the lower floor of the Basilica, in addition to the crypt - which belongs to the medieval construction - you can visit the Museum where archaeological finds recovered during excavations are exhibited.