The Southern Valnerina and the Nera River Park 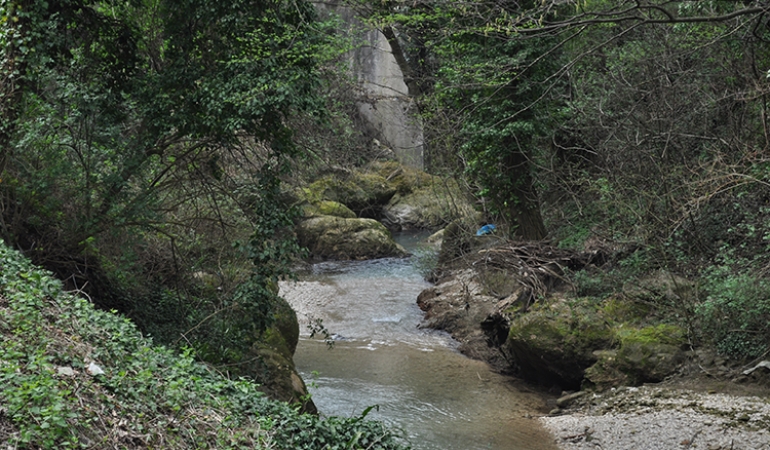 Set up in 1995 by the Umbria Region, the park surrounds the axis of the Nera River (and its main tributaries: the Rosciano trench, and the ones of Ancorano and Castellone-Salto del Cieco), and the confluence of the Velino River flowing past the Marmore Falls.
It has a strong and historical anthropic presence that has also produced a rich and complex architectonic and cultural patrimony that in itself is a value to protect and enhance.
Primary source of water and food, the inhabitants of the valley have always considered the Nera the hub of economic activity. Its waters have made hygrophilous cultivations possible (e.g. the so-called “canapine”), small plots of land along the riverbank, used for the cultivation of wig-trees and woad, essential plants once used to cure leather and dye cloth.
Milling is another fundamental activity of this area, both for milling activities and olive pressing.
Thanks to the abundance of water, the area features numerous important phlogistic and faunal species. There is a significant presence of cryptogam such as calcareous moss, dorso-ventral liverwort and alghe, especially the filamentous species, that characterize the ecosystem of the Marmore Falls riverbed. These are just a few of the particular plants that cover most of the more inaccessible faces of the Falls, and can be considered representative of a unique environment of exceptional and extraordinary aquatic and botanical interest. Making up the multiple environmental varieties is a vast plant-life, the most significant being the endemic, relict, rare and of particular bio geographic value, threatened with extinction such as the ephedra, Ilex aquifolium (holly);the box tree, Tertiary xerothermic shrub relict, survivor of the Quaternary glaciations; the small flowered tongue orchid; the military orchid; water horsetail, only present in another two places in Umbria; the rare travertine moss.
There are also numerous rare species of fauna which bear witness to the integrity of the habitat, among which is the diurnal and nocturnal birds of prey (harrier eagle, peregrine falcon, horned owl, buzzard, long-eared owl and tawny owl); passerine (sparrow, rock swallow and the redstart); and various species of picidae (great spotted woodpecker and green woodpecker); grey wagtail, nightingale, moorhen, kingfisher, grey heron and the rare dipper.
But the Valnerina has a rich anthropic system as well made up of ancient medieval castles, rural villages, fortresses, towers, old mansion houses, mills, parish churches and monasteries rendering the area even more fascinating.
To mention a few of the ancient castles and villages: Collestatte, Torreorsina, Casteldilago, Arrone, Montefranco, Polino, Umbriano, Monterivoso and Ferentillo. But the most majestic, fascinating and representative element is surely the Marmore Waterfalls.

With its surface of 2460 ha, it is the natural entrance gate to the largest National Park of the Sibillini Mountains. It was set up in order to protect the area and create a biological island. It is the first of its kind in Umbria and the first experiential one in Italy.
An important reality aimed at bringing every element of nature together. Not only to protect the environment and for tourists, but also for certified food, quality meat and local farming strictly without chemical fertilizers. Therefore tourists visiting the Nera River Park discover a place where the quality of life reigns at every level.

Itineraries and curiosities of the "Nera River Park"

It covers an area of 2460 ha and interests the lower part of the Nera River, for approximately 20 km, including the municipalities of Arrone, Ferentillo, Montefranco, Polino and Terni.
The Park features two environmental assets: the "Valnerina Gorges" and the Marmore Waterfalls.

The Valnerina valley in the piedmont part overlooking the Terni valley is full of olive trees.
The mountain sides are covered with woods featuring broad-leaved trees as well as the typical maquis species such holm oaks, pines and arbutus.
Near the river, up until the end of last century, it was commonplace to grow hemp of which the place-name "canapina" remains from the Italan name for hemp.

Rich and varied: from the golden eagle to the kestrel, from the hawk to the peregrine falcon in the mountains.
Moorhen, grebe and wild duck near the water.
Bats sleep in the caves of the Marmore Waterfalls.
Age-old castles and fortified villages of the Valnerina all lie within the park.