The town of Otricoli 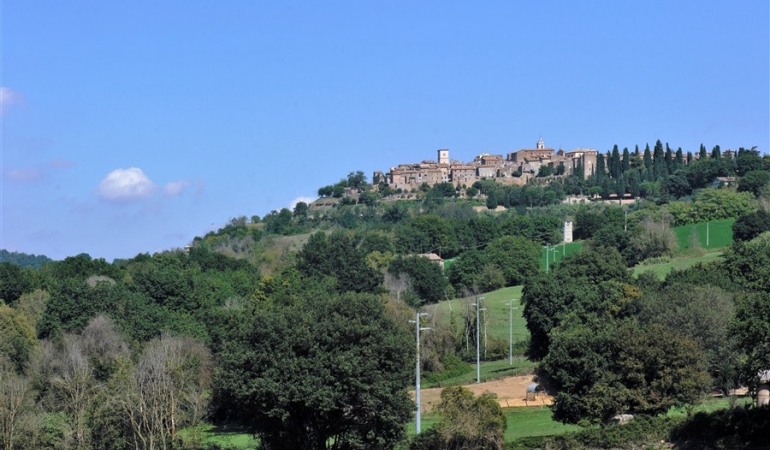 A hill, a bend in the Tiber river and the Via Flaminia have marked the history of OTRICOLI. The hill from which this town overlooks, close to the boundary with Lazio, is the same place where an Umbrian settlement developed. But with the beginning of the Romanization of southern Umbria, the population was encouraged to move to the area below, on the banks of the Tiber and along the Via Flaminia. It is here that the Roman city of Ocriculum was founded. In addition to an important communication route, this migration was encouraged by the presence of the river port built on the bend of the Tiber in the stretch that runs under the hill. Large quantities of foodstuffs and artifacts made in the area left for Rome from that river port. One of the main local products marketed was oil, from which the name "oil port" derived. In the archaeological area of ​​OCRICULUM there remain considerable monuments, - which came to light during the first excavations of the 18th century - of the Roman city,destroyed by the Goths between 569 and 605. The charm of that history can be rediscovered by admiring the Amphitheater (1st century .DC), the Theater (probably from the 1st century BC) and the remains of the Baths, dating back to the end of the 1st century BC and the large substructures, a two-storey structure with vaults that probably supported a temple. The abandonment of the area along the river was followed bya new settlement of the original high ground, which could make for greater defense of the town. The medieval settlement was equipped with walls, parts of which incorporated those of the pre-Roman center.

In the historic center of the village, which preserves a predominantly medieval urban layout, it is not difficult to discover traces of the Roman Otricoli or to notice bare material inserted as an ornamental motif in medieval buildings or from a later period, (as in some noble buildings in which there are Phrygians and architectural fragments from the nearby archaeological area). Another example of the reuse of Roman finds is found in the bell tower of the Collegiate Church of Santa Maria Assunta (church dating back to the 7th-9th century but much remodeled), in the base of which there is a head of Medusa. The church also houses beautiful paintings, such as the table with the depiction of the martyrdom of San Vittore (16th century) and a fresco by Rinaldo da Calvi. Many of the original finds unearthed in Ocriculum are preserved in the Vatican Museums such as the splendid mosaic in the Octagonal Room of the Baths or the beautiful herm of Jupiter, the copy of which is exhibited in the civic collection of the Municipality of Otricoli.

One of the periods of greatest prosperity of Ocriculum, at the time of Emperor Marcus Aurelius, is revived through the historical reenactment AD168, during which, among other things, scenes from the daily life of that city are recreated.