The village of Arrone 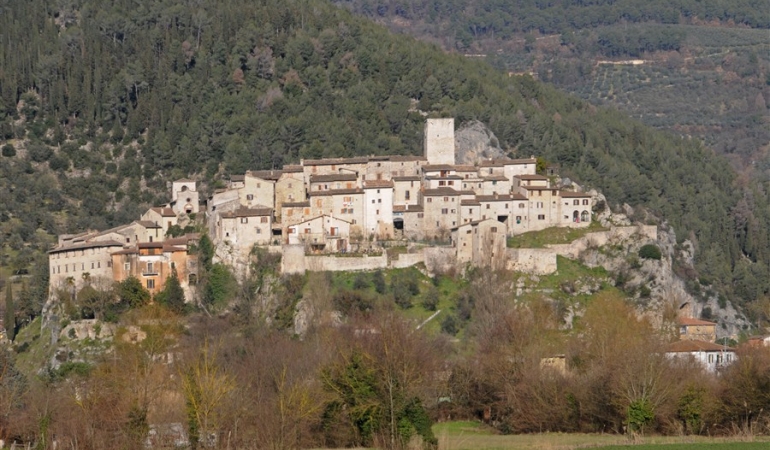 Among the beauties of the Valnerina Ternana,a placeof all respect belongs to the village of ARRONE. From the Marmore Falls, you can reach it in a few minutes, a short path that runs in the spectacular natural scenery of the NERA RIVER PARK. Born to be one of the garrisons for the defense of the Valnerina and for controlling the roads, the oldest part of the village (called La Terra) stands on a hill, maintaining the original fortified and equipped structure of the medieval castle. Walking through its alleys, you can relive the whole atmosphere of that time, the most eloquent testimonies of which are the beautiful gateway, the fourteenth-century church of San Giovanni Battista, of high value for its fifteenth-century frescoes, such as the " Crucifixion ”, and on the top of the hill, the civic tower. Lower down, descending from the actual castle core,is the other part of the village, the one that has Santa Maria Assunta as its landmark. The artistic value of this church is given above all by the 16th century frescoes attributed to Vincenzo Tamagni,Giovanni da Spoleto and Jacopo Siculo. Outside the one hundred inhabited area,between Arrone and Casteldilago,there is the ancient convent of San Francesco,another destination for pilgrims on the Via di Francesco. In the adjacent church,fragments of frescoes with “Stories of San Francesco” can stil be admired.

But Arrone is also a place with a vocation for outdoor sports. True flagship. The stretch of the Nera river that flows in its territory is one of the favorite places for canoe enthusiasts. Without forgetting that, in this area of ​​the Park, the other very popular water sport is rafting. How to say ... in this corner of Umbria, emotions never come to an end.