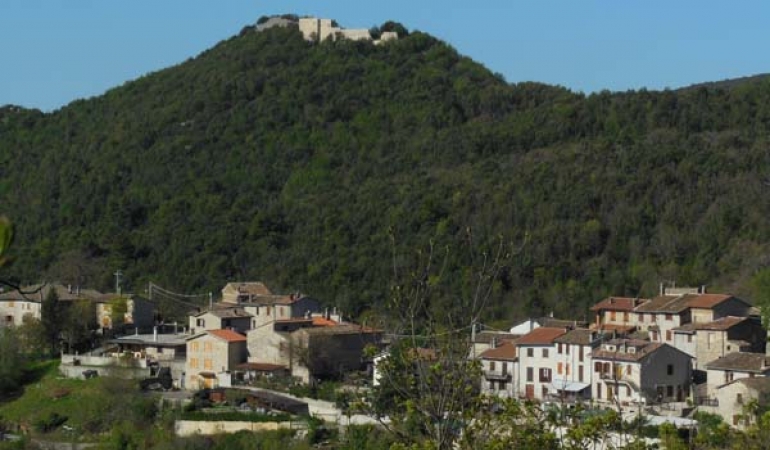 Mountainous area and border between the territory of Terni and that of Spoleto, the Valle del Serra acquired strategic importance during the Middle Ages precisely because of its geographical location. This in fact guaranteed the control of the road system (of which the main route was the Flaminia) connecting the major centers of Terre Arnolfe, Terni and Spoleto. The small villages scattered over the territory named after the Serra stream developed over this period: all of them were fortified settlements having a defensive system. In many ways they are united by the same history, as is the case of BATTIFERRO and CECALOCCO, who have long shared the same church - that of San Giovenale, which could also be reached through a path that branching off the Flaminia led to Cecalocco. The current town of Battiferro (650 m)is not the original settlement nucleus, which was located higher up, in what is now called "I Santi di Battiferro" (766 m). In fact,it is here that stand remains of the defensive system , including parts of the walls within which the castle stood. Bactiferia was a fundamental garrison for the defense of the southern border of the Municipality of Spoleto to which it was ceded by the Arronis during the 12th century, remaining dependent on it throughout the Middle Ages. Close to the remains of the fortress in the locality of the Saints, stands the structure of what was once a medieval monastic complex, in whose church - called the Holy Trinity – are frescoes from the 1400s.

The current town of Cecalocco began being populated between the end of the 1400s and the beginning of the 1500s, after the original settlement was abandoned- which over the previous centuries had centered around a watchtower dating back to the 10th century. Later that same tower served as the bell tower of the church of San Giovenale. Still in the eighteenth century, the town of Cecalocco was devoid of a church but the demographic increase that occurred in that same period made it necessary to build a place of worship. The building of the church of the Santissimo Rosario,  was begun in 1603 and finished in 1678. Until then, the inhabitants had to go to San Giovenale. This church dates back to the late 12th-early 13th century, a period in which the cult of San Giovenale spread throughout the territory. The Saint is depicted together with the Madonna and Child and St. Francis Xavier in one of the frescoes inside the church.