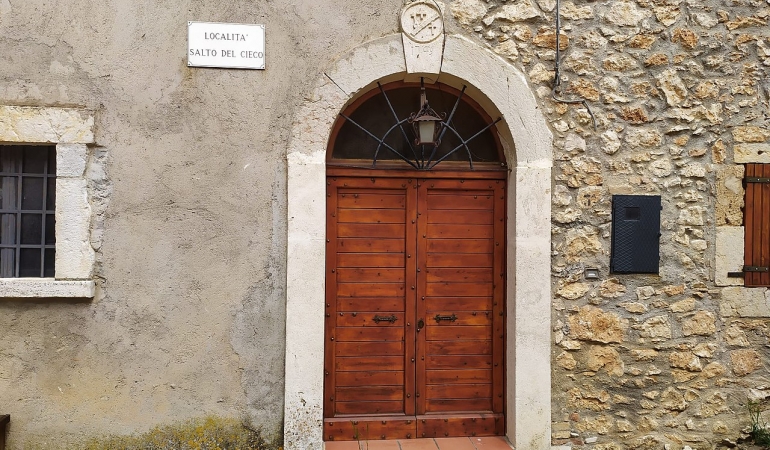 The former Customs of Salto del Cieco is a place where history is intertwined with legend, in a magnificent natural and landscape context. We are in the Valnerina Ternana, in the territory of Ferentillo, a short distance from the village of Castellonalto. As evidence of the activity of the Customs, a transit point between the Papal State and the Kingdom of the Two Sicilies, where duties and gabelles were collected for the goods that had to cross the border, there are some of the buildings of the customs complex, which also included a barracks for housing the guards and a room for the detention of offenders. The more than 300 kilometers of the border were delimited by 686 stone cippi placed between 1846 and 1847 and numbered in progressive order from the Tyrrhenian to the Adriatic coast, each of which bore the lily of the Bourbons on the side towards the Kingdom of the Two Sicilies and on other the pontifical decussate keys. In one of the remaining customs buildings you can see the coat of arms with a Cross and a Key depicted in the upper part, as a symbol of the State of the Church and in the lower part, divided from the other by a bar, the lily representing the Bourbon Kingdom . If these are the tangible signs of history, the legend is inherent in the name of the place. In fact, they say that here in the past the wayfarers were often assaulted  by of a group of brigands: one of them, pretending to be blind, approached the victim under a pretext, who after being robbed was thrown into a cliff. "Salto del Cieco" evokes this popular tale. Nowadays, the Salto del Cieco area is mainly frequented by hikers who walk along the nature trails to “plunge” in the beauty of the surrounding nature. It is also a stage of one of the segment, the most mountainous one, of the ring route called "GreenWay del Nera" which winds through the entire Valnerina.