Discover the city of Terni 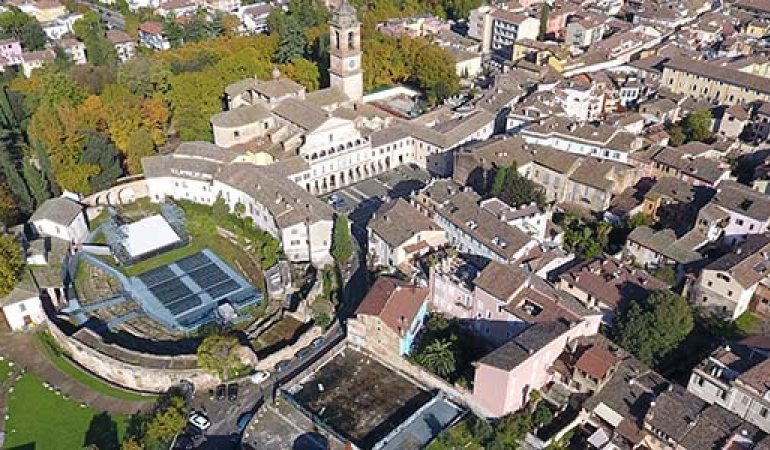 A town closely linked to nature with its umbilical cord going from piazza Valnerina – the name the people of Terni give to piazza Bruno Buozzi – along V.le Brin as far as the Marmore Waterfalls and Nera Valley.

Water is the power of Terni and it is from water it takes its name, its origins.

The ancient Interamna Nahars (city between two rivers), still today owes a debt of gratitude and close tie with the waters that flow through it, now controlled and not as turbulent as in the past.
Unlike many Umbrian towns, Terni is in a plain, 130 mt a.s.l. Part of Lake Tiberino stretches into the Terni basin.
The first populations took to the hills to escape the unhealthy air of the valley bottom, instead in this case, it was the presence of water that attracted them.
They radically modified the structure of the area to render it more hospitable: the Serra River was diverted and lands reclaimed.
The coat-of-arms of these people became the pestiferous dragon (Thyrus), that endangered the swamps until it was defeated.
“A pretty garden”, as Cipriano Piccolpasso defined the Terni Basin in the middle of the 16th century, exalting the fertility and extension of olive groves.
Historical testimonies of olive cultivation and the importance it exercised upon local economy, date back to the ancient majolica of Carsulae and epigraphs of Saint Andrea at Cesi, that made oil urns.
In Colleluna which lies on the outskirts of the town, the remains of an old Roman mill have been uncovered. The sacrificial altar dedicated to Neptune, housed in the Archaeological Museum of Terni, represents a priest offering a patera overflowing with oil.

The city was founded 2500 years ago, but the first recorded inhabitants were from the Inferior Palaeolithic and Iron ages.
An inscription dating back to the period of Tiberius, affirms that Terni was founded 81 years after Rome by the Umbrians or Sabines. More recent studies support the theory that it was the work of the Naharci, an aboriginal population from the Sibillini Mountains, who came down from the mountains and steadily advanced along the Nera River.
The Roman structure can be seen in the ‘opus quadratum’, with regular cardo and decuman roads that divided the town into four parts.
In the 1st century, the Christian cult took over from the deep-rooted Mitra and other cults of eastern origin.

The survival of pagan celebrations such as Cantamaggio (May floats and songs) and the Festa delle Acque (Water festival) bear witness to the previous religions. The latter is not just linked to the presence of the Marmore Waterfalls but also to land reclaiming works. Legend tells us that at the confluence of the Nera and Serra rivers lived a monster, hidden amongst the rich vegetation whose breath was so foul-smelling that it poisoned the air of the zone and its inhabitants. A warrior confronted it and killed it. Thyrus the dragon was dead but its image against a red background still dominates as symbol of the town. In the XI century the former Interamna became Terni.
In 1155, Federico Barbarossa camped on its mountains and in the Valnerina valley to attack Spoleto. Even though is had a Guelph soul, the city welcomed the emperor. Afterwards, not having accepted the imperial magistrates, it was razed to the ground by Cristiano di Magonza.

St. Francis visited Terni many times: he spoke in the small square of St. Christopher, turned vinegar into wine and resuscitated a young boy who had been crushed under a collapsed wall.
In 1290, Nicolò IV annexed the town to Church Patrimony. In the middle of 1300 it was fortified with a town wall and one hundred turrents. In some parts it was also fortified inside with inhabitable towers, the remains of such are those of Castelli and Barbarasa.
...In 1553, Giulio III created the count of Collescipoli, Michelangelo Spada who gave the town the imposing and artistic Palace that bears his name which was finished in the 18th century.
In 1554, Giulio III approved the  Municipal Statutes of Terni, that with successive reforms, stayed in force until the French Revolution.
In 1569, works began with the project by Vignola of the rebuilding of the Roman bridge which had collapsed 19 years beforehand.
In 1625, the archduke Leopold of Austria, passed through the town and donated the high altar to the Church of St. Valentine and arranged for the restitution of the Saint’s skull which his family had possessed for more than 300 years. He kept a tooth for himself.
In 1705, the town was hit by a devastating earthquake that destroyed Umbria. Many buildings collapsed and several churches including St. Francis’s. The Bishop’s Palace was sold and the Carrara palace was bought as the new town hall.
In 1789, the Pope proclaimed complete freedom of trade, agriculture and sheep-breeding in the Church State.
In 1798, the French general Mac Donald occupied Terni, when the freedom tree was raised there was great rejoicing because it coincided with the abolition of the grain tax.
In 1849, the town sent a sum of money and voluntary forces to the Roman Republic.
The second half of the 19th century saw the birth of the steel industry in Terni with the exploitation of the water in the area, especially the Waterfalls.
In 1929 the main power stations were born: Galletto, Monte Argento and Recentino.
During the Second World War the town and its factories (and because of the factories) was bombed 108 times which deprived the people of Terni of the illusion of invulnerability of the Valnerina valley and the ‘Basin’. Between August ’43 and June ’44, 40% of the factories and the eastern part of the town were destroyed.