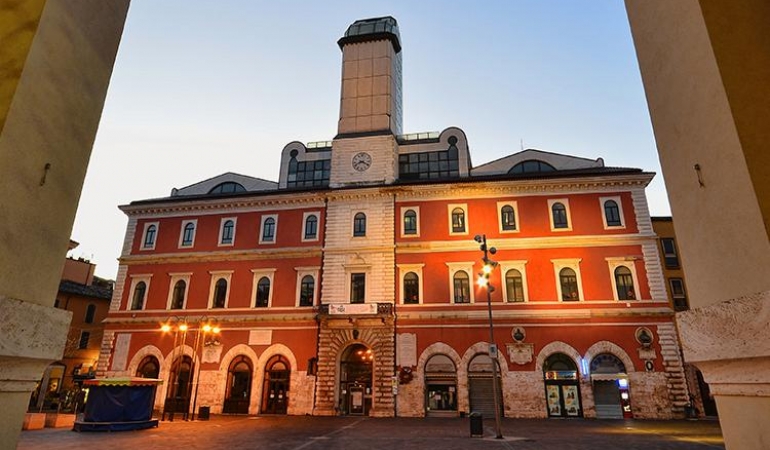 Among all the buildings that overlook Piazza della Repubblica, an area included in the Roman Forum of Interamna, one stands out not only for its colour and the beautiful portal but also for the peculiar tower that rises above it, standing out on the middle of the building. It is the building that houses the Municipal Library of Terni. And the glass and marble tower, with a panoramic terrace, is the one that since the 90s of the last century has replaced the bell tower of the original building dating back to the end of the 13th century. Yes, because the current one, whose appearance and structure are due to an extensive renovation in the second half of the nineteenth century, is the result of the transformations undergone over time by the medieval Palazzo del Podestà. Political heart of the city, place where city assemblies were held announced by the bell of the original tower. The history of this palace could be summarized as follows: from the center of political power of the city to the current hub of the cultural activities of the city. Of the fourteenth-century construction only a few mighty structures remain visible in the Sala XX Settembre with cross vaults. In fact, as early as the fifteenth century, the Palace underwent "readjustments" to accommodate the various public figures who took turns - from the podestà to the representatives of the papal authority. In the second half of the nineteenth century, the architect Benedetto Faustini "reinterpreted the building in the Renaissance style, redesigning the facades and rebuilding the bell tower crowned by Ghibelline battlements". Since then, the building became the town hall, fulfilling this function until the 1970s. The last renovation was carried out about ten years later, with which some rooms were recovered and others were transformed to house the Library Rooms. These wirks also made it possible to bring to light some frescoes, such as those in the Sala delle Colonne. The new tower is also set up, which in its shape differs from the previous one destroyed by bombing, becoming a symbol of connection between past and present.