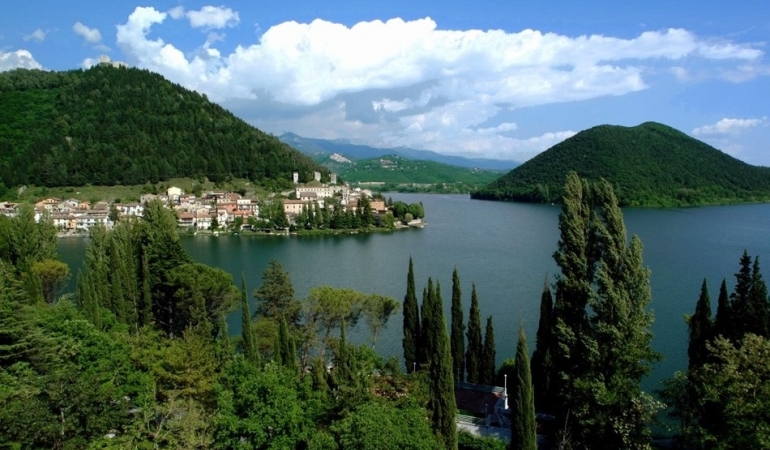 Lake Piediluco remains in your heart after you have seen it. The glimpses of it that appear before entering the village reveal its beauty. The village, gathered at the foot of Mount Luco, overlooks the lake,its lake. There is a close and very ancient bond between the two.

On the top of Mount Luco stands the mighty fortress which in the Middle Ages presided over the territory. From here the gaze dominates an incomparable view: the lake, with its peculiar shape and its elongated arms, appears nestled between green hills and valleys that make up a wonderful landscape. The mountain that stands out on the opposite side of the village and that seems to float is the Caperno. Residents call it "the mountain of the Echo" for its ability, they say, to return an echo if you give it a cry.

During the summer, the lake comes alive with the many colorful boats that "bask" in the sun,but is also populated by canoes,sails and windsurfing enthusiasts. While all year round, this stretch of water is plowed by the boats of the rowers who train there, being Piediluco the home of the National Center for Olympic Rowing Preparation.

Walking in the village, you can see delightful glimpses of the alleys on which the houses are leaning and you will meet pretty squares from which to admire a beautiful panorama. The Church of San Francesco overlooks the street from its elevated position.

Built to commemorate the passage of the Saint to Piediluco,the church was completed in 1338. Today it is a Franciscan Sanctuary and is included in the itinerary of the Via di Francesco.