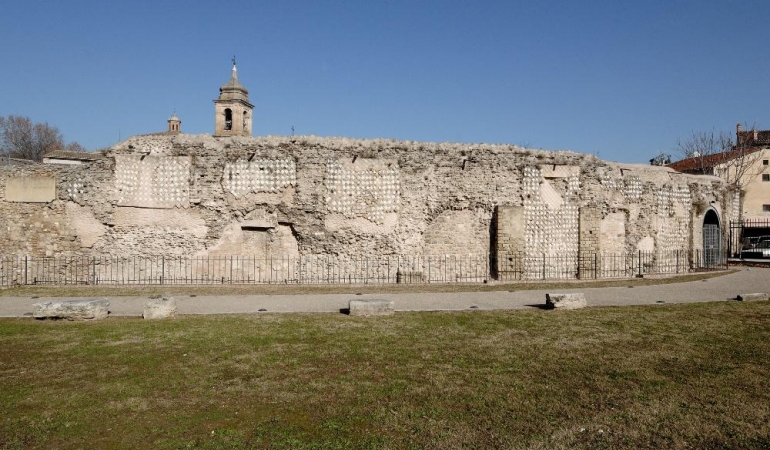 One of the major evidence of the rich stratification of the history of Terni and the most impressive monument that is preserved from the city of Roman times, called Interamna- is the Amphitheater, of which considerable remains can be admired near the Duomo. This building was located within the walls of the Roman town The influx was also facilitated by the proximity to the south door from which a stretch of the eastern branch of Via Flaminia entered the city. Until a few decades ago the dating of the monument was related to an inscription of 32 D.C. by Fausto Tito Liberale, Seviro Augustale- ie a member of the college in charge of the imperial cult - and found in the fifteenth century near the Roman archaeological find. Tradition has interpreted the epigraph as dedication of the monument, so as to be called "Amphitheater Fausto”. A new analysis of the epigraphic text carried out in more recent years has established that it is a sacred dedication, which is not referred to the amphitheater. In any case, the building techniques used - in particular the opus reticular bicroom - architectural and structural characteristics and the results of new archaeological excavations suggest that the of the building date back to the first decades of the 1st century AD. Over the centuries parts of the masonry structures of the amphitheater were used for the construction of the bishop's palace and the Church of the Madonna del Carmine, while maintaining its original elliptical form, on which these buildings have been adapted. The excavations, especially the most recent ones, have thrown light on the structures, even the most internal ones, which made up the work, whose some remains are nearly10 metre high. The high can only be seen of the ground floor, but a 15th century design allows you to identify a second order with architated windows. The amphitheater (approximately 98.5x73 m) has a perimeter gallery, a ring of radial structures having a function of supporting the cavea, an internal ambulacrum and another band of radial environments. The restoration works of the monument have made it a space of great fascination for theatrical performances and cultural events, within a frame of historical-archaeological value.