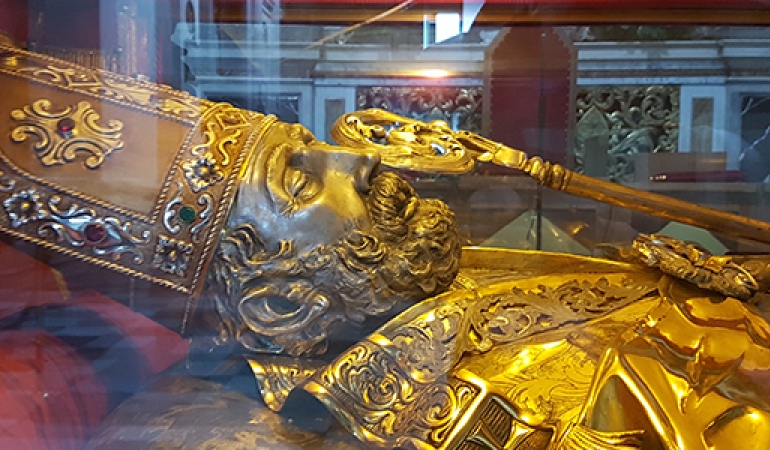 The present church dates back to the beginning of the XVI century, but inside parts of the medieval structure have been uncovered. Over the following centuries it was embellished and at the beginning of the XVII century was completely renovated. In 1630 the remains of St. Valentine were placed in an urn which is now under the altar. The 18th century façade features a portal in the lower part and a large window in the upper. The inside also features 18th century decorations in the six chapels where important paintings can be admired: in the first chapel on the left we can find the painting by Andrea Polidori “Madonna with Child and the Saints Laurence, John the Baptist and Bartholomew”, in the Chapel of Saint Theresa “Madonna with Child and the Saints Joseph and Theresa”, in the chapel of St. Michael on the right there is the painting by Cavalier Arpino entitled “St. Michael Archangel”. A staircase leads to the Crypt where the remains of the Saints Procolo, Efebo and Apollonius are preserved and the museum where the findings from the excavations have been housed. In the centre of the choir of the Basilica is St. Valentine’s well where the letters with messages of love from all over the world are collected. There is a recently renovated convent adjacent to the church which is now a university.

There are many versions about the origins of the St. Valentine tradition, patron of Love the world over. The most touching is that of two young lovers, Sabino and Serapia, hindered in this relationship by their respective parents because they belonged to different religions (Christian and Pagan). They appealed to the Bishop for help and he married them. When Serapia became ill with tuberculosis, Sabino called St. Valentine to her death-bed. Sabino implored the Saint to help him, telling him that he could not live without his companion. Answering their prayers of desperation, Valentine prayed to the Lord, and the two lovers left earthly life to live together in eternity. St. Valentine is worshipped also in Anglo-Saxon countries where the legends tells of the bishop that gave a flower from his garden to young visitors. Two of these young people fell in love and were married by the same bishop. Their relationship was such a happy one that many couples followed suit so the Saint decided to dedicate a day of the year to a general wedding blessing.

The St. Valentine celebrations that take place throughout the month of February inTerni the City of St. Valentine and the City of Love, are not only religious. Terni becomes romantic and welcoming, involving retailers, hotels, cinemas, theatres, restaurants, bars and clubs and offers great shows, cultural gatherings, art and intellectual itineraries. So a rich calendar of events and festivities is born full of ideas and gifts of love. One of the most important being theSt. Valentine Golden Award given to those who have stood out in the field of culture, science, sport and humanitarian organizations. In the same period there is also a poetry and prose competition. And much more, concerts, exhibitions, films, plays, shows and many other events to discover and enjoy to the full.

Over the course of its history, the fifteenth-century Palazzo Mazzancolli, overlooking via Cavour...

The most awaited sporting event in the city of Terni is approaching. The San Valentino marathon, ...

Terni continues to shine after Christmas with romantic artist lights to kick off the most importa...