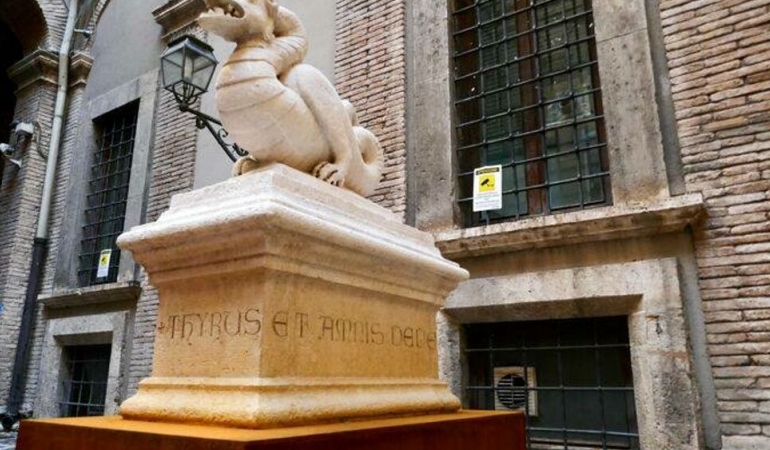 In the internal courtyard of Palazzo Spada, the noble building that houses the Municipality of Terni, a travertine statue of a dragon stands out at the base of which we read “Thyrus et Amnis dederunt signa Teramnis” (TheTire and the River gave the signs to Terni). Tire or Thyrus is the emblem of the city, depicted in the official coat of arms which also bears the same inscription as the sculpture. A medieval legend is associated with this mythological animal. This tells of a dragon that infested the marshy areas around Terni, terrorizing the population with its deadly jaws. Only a brave young knight dared to face the terrible monster, managing to kill him with his spear while being dazzled by the reflection of his shield. The legend has a reference to malaria which was very widespread in the remote past among the local population due to the unhealthy environmental condition of the Terni basin due to the presence of swamps and marshes. The killing of the dragon therefore symbolizes the rehabilitation of the territory of the Nera Valley- resulted from reclamation works- which put an end to the spread of the epidemic. According to the historian Luigi Lanzi, the sculpture of Thyrus can be ascribed to the Middle Ages, while other scholars believe that it was made between the sixteenth and seventeenth centuries.