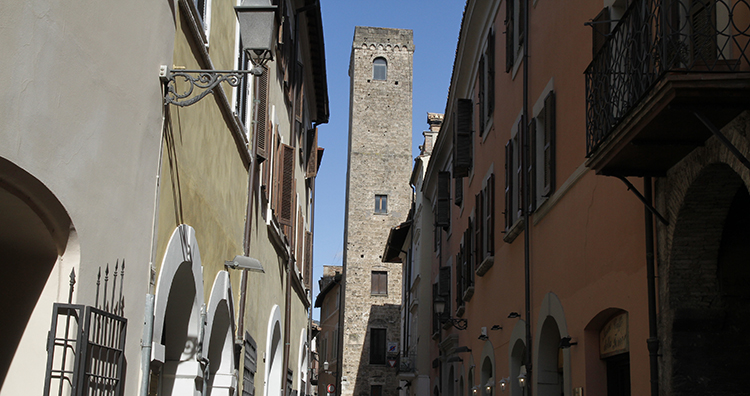 About three hundred towers had been built in the city but by around 1600 very few were still standing. The best preserved, both then and now, is the Barbarasa tower.

The Barbarasa family were one of the most prominent in Terni in the 15th and 16th centuries and counted among its members priors, general councillors and local notables, in syntheses city administrators, as well as a canon of the Cathedral, Giulio Barbarasa.. A powerful family, therefore, especially from a financial point of view, so that the house-tower they built (even if the first structures date back to the 13th century) was meant to be representative of this power. The Tower, considered to be a construction built to defend the city, was without doubt a "watchtower" to defend the Barbarasa property, which bordered that of the Spada family.

In the town history the Barbarasa tower is remembered above all for an incident linked to the plague epidemic which struck Terni towards the end of the 17th century. On hearing the news about the plague epidemic in the centre-south of Italy, the city council decided to put soldiers at the city gates to prevent strangers from entering. In the meantime in the Cathedral and San Valentino the religious ceremonies continued. A lazaret was opened in the convent of the Grazie, therefore outside the city, to give shelter to those who came from the suspected areas. The inns and other convivial places were closed; a ban was put in place for tramps and beggars to stop them from moving from place to place. Part of the city wall was also rebuilt, in the porta Romana area, which had collapsed due to neglect. But the preventive measures were to no avail. The first cases of bubonic plague were registered at the beginning of the summer of 1656 in the Cathedral district. A year later, in June 1657, the bishop, Sebastiano Gentili, seeing as the situation was still serious, organized a large procession through the city streets and, at the end, climbed to the top of the Barbarasa tower, the tallest building in Terni, carrying with him the relic of Precious blood. From there he prayed for divine protection and blessed the city. All this is remembered on a plaque set half-way up the tower, on the initiative of the owner of the tower at that time, Felix Barbarasa.

The tower is still inhabited today.