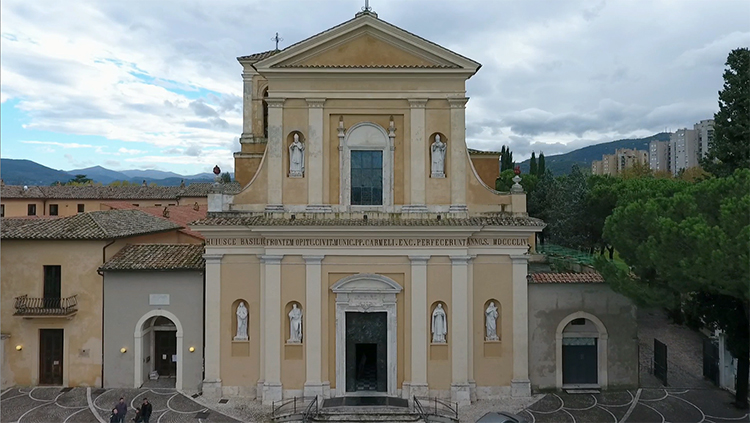 The Basilica of San Valentino is located about two kilometres from the centre of Terni, on the site of an ancient Christian cemetery. Thiscemetery isone of the most important examples of early Christian necropolis in Umbria. It is dedicated to the patron saint of the city and to lovers. It was built on the burial site of the martyr, who had been beheaded in Rome along the Via Flaminia and brought back to Terni by his disciples. A sacellum was built on his tomb, and it was later transformed into an early Christian basilica with five naves.

The classical façade was completed only in 1854.

The single-nave interior is of a sober Baroque style, adorned with stuccos and it has a vaulted ceiling. The altars contain large 17th century paintings, of greater importance are those of the Flemish painter Lucas de la Haye, the Cavalier d'Arpino and Luca Polidori. Under the high altar is a crystal coffin containing the reliquary statue of San Valentino.

The crypt is interesting, for it is the original nucleus of the church. A small lapidarium containing many ancient fragments deriving from several past excavations carried out in the area has been set up in a nearby room.

Next to the church there is a large structure which is the old convent.