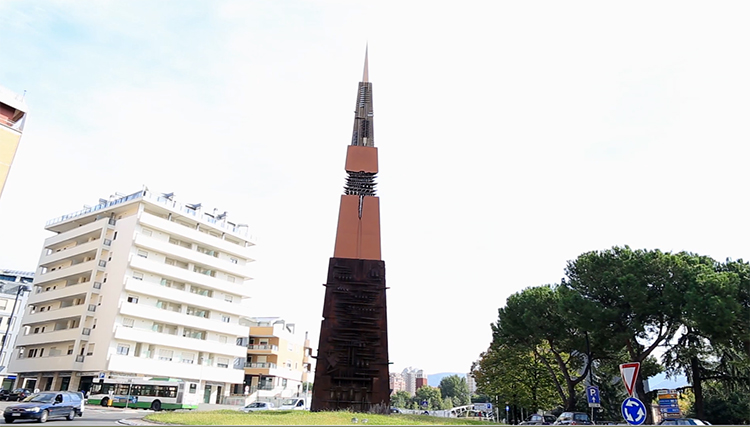 It is known to everyone as Pomodoro’s obelisk, but It is called "Lancia di luce" (Spear of Light) It is the modern symbol of Terni and depicts the evolution of the art foundry of raw iron from the base to the top, which looks like gold. In actual fact it is five blocks of stainless steel. The art of the master founders of Terni has meant that, using various alloys, the stainless steel takes on different colours. A total weight of ninety tons for a work of art thirty metres high; thirteen thousand hours work to realize the project conceived by a sculptor such as Arnaldo Pomodoro whose works have been installed, making them even more beautiful, in cities such as Melbourne, Los Angeles , New York, Rome, San Paolo.

It is probably one of the only works by Arnoldo Pomodoro, who had always wanted his works to be cast in bronze, to be built entirely in steel, and today it is the largest work of art in the world to be realised in molten steel. In order to give it its particular colours, different for each one of the blocks, new smelting procedures were experimented, using sand from African mountains and Australian beaches for moulds.

Operations made possible thanks to the partilicular experience acquired at the steelworks by some technicians, under the guide of Master Mario Finocchio.

The union between a master of modern sculpture and the experience of master shapers, smelters, alloys and metals experts and welders, has contributed to the realization of a work of art that wants to be at the same time witness of Terni's past and its projection towards modernism. Its positioning corresponds to this purpose: the entrance to the city centre which coincides with that Corso del Popolo designed by two masters of contemporary architecture such as Mario Ridolfi and Wolfgang Frankl.