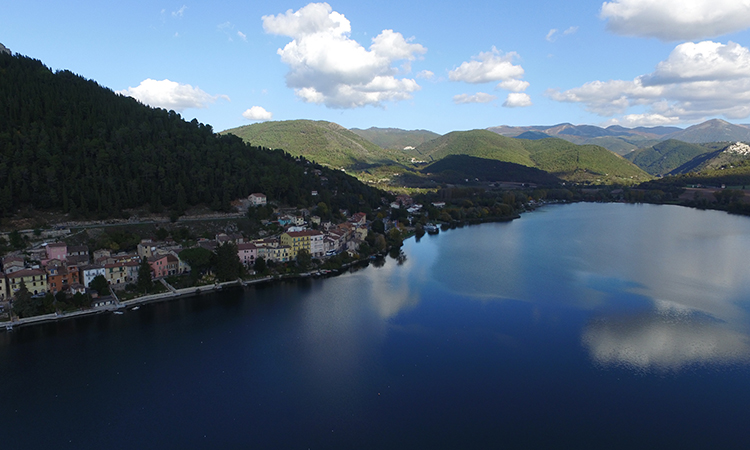 The lake (368 m asl), of natural origin, has a surface of 1.6 square kilometers, a perimeter of

about 15 km and a maximum depth of 19 m. The main natural tributary is the Fuscello trench

coming from the mountains of Leonessa (RI).

Theartificial tributaries linked to the hydroelectric exploitation are: the canal that connects it to the Velino river and the Middle Nera canal (42 km long) that feeds the Nera river into the lake. The lake and the territory of Piediluco are involved by two sites of the European Natura 2000 network. This is what remains (together with the lakes of Rieti) of the ancient Lacus Velinus, a marshy area reclaimed from the III century BC. with the creation of the Curiano canal (Cascata delle Marmore). Its current name recalls the town of Piediluco that overlooks the lake, located at the foot of Monte della Rocca (542 m asl) where stands the fortress Albornoziana erected in 1364 on the site of the ancient castle of Luco (XI century). The name literally means "at the foot of lucus" (from lucus = sacred forest). The lake was an important way of communication that connected roads and places through its ports.

One of the Grand Tour stop-over was represented by the 18th and 19th century landscape painters including Camille Corot. It is crossed by the "via di Francesco", where a church was erected in the ancient port of the village in memory of the saint's visits in the 14th century. Today the main activities are related to tourism and water sports.