The village of Poggio di Otricoli 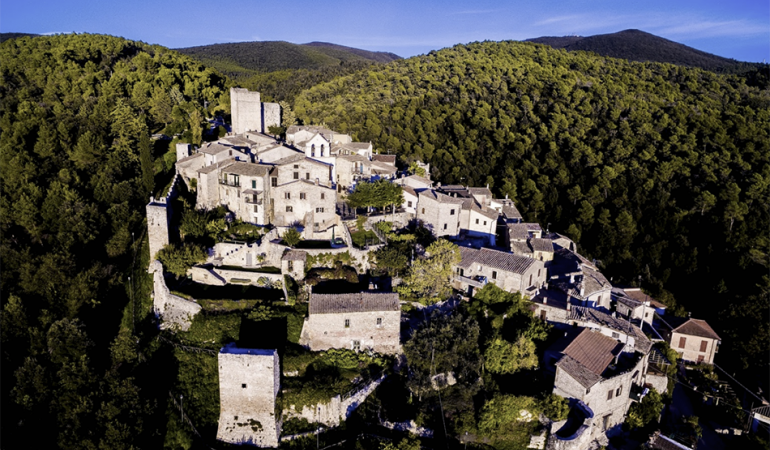 The toponym of this small village hints at its location on a hill. Precisely, it rises at 387 m, along the western flank of Mount San Pancrazio (1027m), a position that offers a wide view of theTiber valley below and from which  you can sweeps beyond the regional boundary over the upper Sabina. Before being integrated into the municipality of Otricoli, of which today it is a part, Poggio was subjected for centuries to Narni, who bought it in 1276, undergoing repeated abuse from which it often tried to defend itself, also being able to count on the support of the ecclesiastical authority, bothered the hostility of the of the inhabitants of Narni towards papal policies. And although it was freed in 1518 by Pope Leo X from the vassalage of Narni, the Castle of Poggio remained dependent on this town until the early nineteenth century. Poggio was also often involved in disputes with the nearby Otricoli and Calvi of Umbria for the settlement of their respective territorial boundaries, which were settled with an agreement between the contenders in the second half of the fifteenth century. Every year as part of the celebrations of San Pancrazio in Calvi of Umbria, the act by which the limits of their territory were established for each Castle is symbolically renewed. Poggio still maintains the appearance of a medieval village: its original walls comprise towers, the largest of which overlooks the town and dominates the entire valley. Almost all the other towers had a defensive function, in fact they are equipped with slits from which one could respond with arches and crossbows in case of attacks. From the tower located higher up, a road slopes down towards the square that faces the church dedicated to San Nicola, patron saint of the town. This sacred building, on whose roof rests a small bell gable,was built between the fifteenth and sixteenth centuries, remodeling a previous Romanesque church of which the structure of the apse is still evident. The figure of the titular saint is represented in the bas-relief placed above the entrance portal, whose crowning arch bears the Christological monogram of San Bernardino. Among the paintings preserved inside you can admire the fresco "Saint Catherine of Alexandria crowned by Angels", the altar canvas "Madonna with Child and Saints" by the painter Calisto Calisti and the fresco in the second chapel on the right "Madonna in glory with the Child and Angels ”attributed to the local artist Pancrazio Iacovetti from Calvi dell'Umbria, father of the painter Rinaldo.