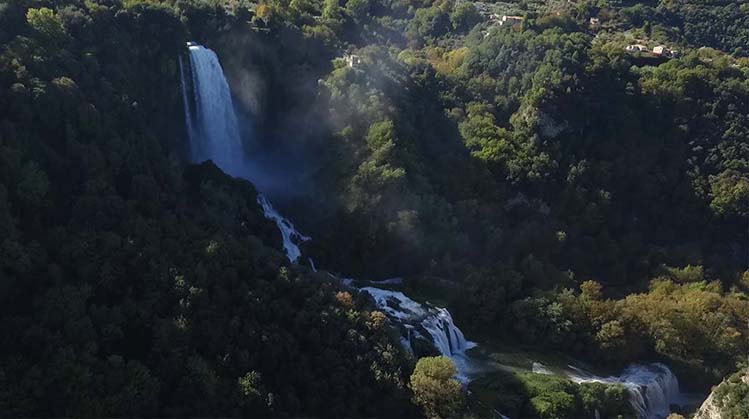 The Marmore Waterfall is formed by the fall of the river Velino in the river Nera that flows below, with a jump of 165 meters. It is not a natural phenomenon but a work of human ingenuity realized, according to tradition, in the III century BC, 271 BC, from the Roman consul M. Curio Dentato that to reclaim the Rieti plain from the marshes of the Velini lakes, through an artificial canal then called Cava Curiana. Between the I century BC and I century AD other regulating and embedding works recalled by Cicero and Tacitus were carried out.

The waterfall remained in use until the 11th century, when the Curiano canal was obstructed and the ancient marshes were reformed in the plain of Rieti. A new reclamation phase begins: called "reclamations of the Renaissance". Starting from the 15th century and until the end of the 18th century many were the interventions made by the most famous architects of the time including Fioravante Fioravanti in 1417-22, Antonio Sangallo the Younger in 1545, Giovanni Fontana in 1598 -1601 and Andrea Vici in 1787-1793. The Grand Tour stop-over between the 17th and 19th centuries was visited, described and reproduced by the greatest artists of the time. Since the end of the 19th century it has been used for energy purposes to feed several hydroelectric plants and since the 30s it is part of the great hydroelectric system of the Galleto plant.